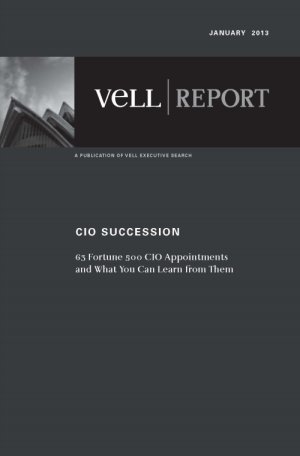 The Chief Information Officer has evolved from pure information technology management into a central business role. The CIO is responsible for managing the information systems and technology platform that enables everyday business operations, while at the same time finding ways to leverage more cost-effective technologies, more versatile software and better management methods as they emerge. That ongoing challenge of "changing the engine while the jet is flying" is only the more technical side of the role.

Today's large-company CIO can also play key leadership roles in technology-enabled process improvement and business innovation, risk management and compliance, analytical performance management, business model design, and strategy formulation. The CIO needs the technological depth to evaluate new opportunities, together with the business breadth to serve as a versatile member of the executive team. The CIO should be a driver and an interpreter in both these worlds.

There is, however, vast variation across companies and industries in their needs, their technological pace and evolution, and their expectations of this critical role. And the CIO role evolves fast, driven both by the pace of technological advancement and by the growing ability of many corporations to put their information and technology to work in new ways. So, even though the CIO role has been around for decades, many corporations and their CEOs are uncertain about the background and capabilities they need in their next CIO.

To shed light on the situation and discover trends in who's filling the CIO role, we analyzed CIO appointments over an 18-month period in major companies operating in the United States. What are the basic characteristics of CIOs? What experience, education and background do they bring to the table? To whom do they report? Are they insiders or outsiders? What industries are they recruited from? How fast does the role really turn over? Here are the highlights of what we learned.

The average age of these appointed CIOs is just under 50, typical for many senior executive appointments, and age is higher in larger companies.

Over one-third of appointed CIOs are women. They tend to be in larger companies (including three of the seven largest), to be slightly better educated than their male counterparts, and to be much less likely to report to the CEO. In addition, 70% of women are insiders; only 30% are hired into the CIO role.

The CIOs in our study are predominantly Caucasian. 11% are of Indian background, and 5% are African-Americans.

These executives are well-educated in business as well as technology-70% hold advanced degrees, and about two-thirds of those degrees are MBAs.

43% report directly to the CEO/president, the rest divided between the CFO and an operations executive. CIOs report higher in larger companies.

56% have prior experience in the CIO role at a divisional level or at another company.

56% were insiders, and larger companies are more likely to promote or make lateral moves (such as appointing an insider with a business background). 86% of CIOs hired from the outside have prior CIO experience.

CIOs appointed from the inside have significant tenure with the company-ten years or more. However, brief tenure is also common when a candidate has been brought in to be groomed for the role.

One-third of hired CIOs have diversified industry background, and the financial services industry is the most common recruiting ground for hired CIOs.

The largest companies in our sample tend to appoint older CIOs and more women. With more developmental opportunities in divisional CIO roles, large companies tend to promote seasoned and well-known executives. When going outside, they want CIO experience.

The smaller (but still major) companies in our sample tend to appoint younger CIOs and fewer women, and to hire experienced CIOs from outside. They rely more on MBAs for the business side of CIO experience.

The average tenure-in-role of the former CIOs (replaced by these new appointments) is five years, but a year shorter in the very large companies.

Management shake-ups and corporate restructurings can make tenures short, but the CIO role can be either a stepping-stone or a destination job. Many of the former CIOs in our sample went on to bigger and better things, and others made lateral moves.