The average age of the CIOs when appointed is 49.5, and 76% are between 45 and 54. The youngest, at 38, is with Starbucks. The two oldest, at 58, are with AutoZone and H.J. Heinz. The average age is the same for men and women. Thus, most of these executives have plenty of "run room" left in their careers.

Larger companies tend to appoint older CIOs, with 65% age 50 or older, reflecting their tendency to promote long-tenured candidates. And outsider CIOs are a bit older than those who are inside appointments, suggesting that companies seek more experience in outside candidates than in inside candidates whose track records are well known. 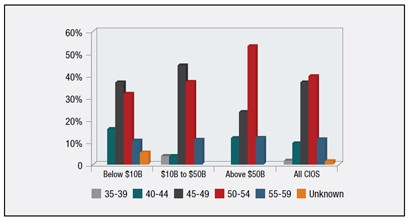 37% of these CIOs are women. The larger companies have a higher concentration of women as CIO appointments, including at some of the largest-Walmart, Bank of America, and IBM. Among CIOs joining from the outside, the women tend to be younger than the men. The opposite is true for insider CIOs, suggesting that some companies still make women executives prove themselves for longer periods before promotion.

The preponderance (83%) of these CIOs are Caucasian. Three are African-American, and seven are of Indian background. The latter is not surprising given the outstanding technical credentials and high levels of education of many individuals of Indian and Indian-American origin.