Written by Dora Vell
Published in Tech Industry Executive & Board Moves
Be the first to comment!
Read more...
Friday, 15 June 2018 03:49

Board Changes in Giant Tech Companies in First Half of 2018

Giant technology companies have had plenty of action with their boards the first half of 2018. This is the second of a two part series of updates.

Published in Tech Directors on Corporate Boards
Be the first to comment!
Read more...
Wednesday, 13 June 2018 08:24

Trends in Exec & Board Changes in Tech Companies

Giant technology companies have had plenty of action with their leadership teams in the first half of 2018. This is the first of a two part series:

Also please look at Part 2 - Tech Company Board Appointment Trends, which will be posted on our blog and on our .

Cloud-based software platform for medical providers, Athenahealth is in turmoil. CEO and co-founder Jonathan J. Bush, Jr., 49, stepped down as President, CEO and Board Member. He had been replaced as Chairman last year by Jeff Immelt.

Welcome to the 55th Edition of the Open Tech Roles  & Latest Appointements newsletter.  This edition covers the 31 days ending May 17th, 2018.

Hope you had a great Memorial Day Weekend! 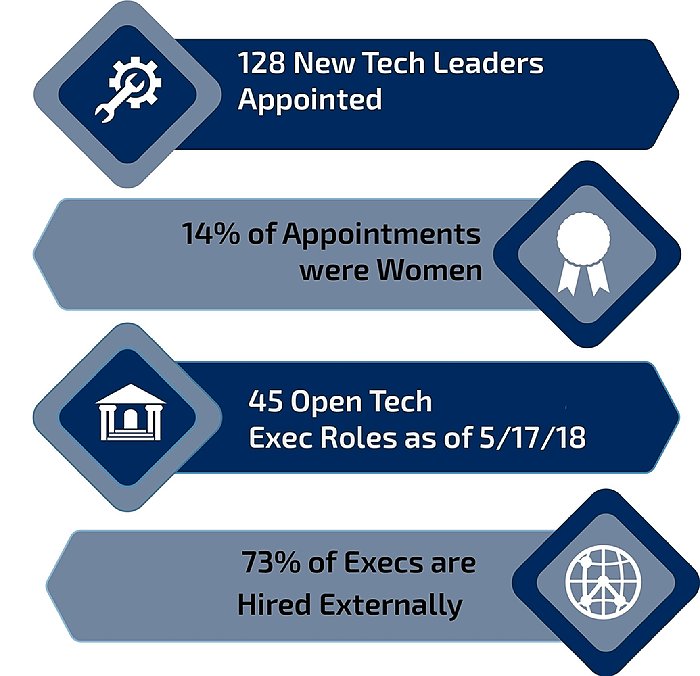 Carl Icahn wins big at Xerox and the Resulting Board Shuffle

Facebook has re-organized its ranks in the wake of user privacy issues that has been creating waves across all quarters. The social network’s misuse in the spread of Russian propaganda and disinformation and the more recent Cambridge Analytica scandal have made data privacy and security issues the foremost priority for the social media giant.

Jan Koum, 41, CEO of WhatsApp stepped down from the board over significant disagreements over privacy issues. The company hired heavyweight and Senior Obama Advisor, Jeff Zients, 51. Earlier this year, the company also hired its first non-white director, former American Express CEO, Ken Chenault, 66. More details on the board shuffles are outlined below.

We endeavor to catalog all open technology CEO roles (as of 4/30/2018) and latest appointments for the month of April 2018.

The average length of time the searches are open is 4.7 months, up from 4.3 last month. There is little variance across geographies.

NCR Corporation has named Frank Martire, 69, as Executive Chairman. Martire most recently served as non-executive chairman of FIS till last year. He served as CEO of FIS after acquisition of Metavante, where he served as CEO before the acquisition.

Published in Tech Industry Executive & Board Moves
Be the first to comment!
Read more...
Page 5 of 107