Fortune 500 CIO Succession – Who do CIOs Report to Now? Featured

Over the years, CIOs have tended to report higher in the organization, often to the CEO, and to play more influential roles on their executive teams. Our data confirms that trend. 43% report to the CEO or President, and 30% to a senior operations executive, such as the Chief Operating Officer, Chief Administrative Officer, or Global Technology Officer. 27% report to the CFO, which is more of a historically traditional appointment. 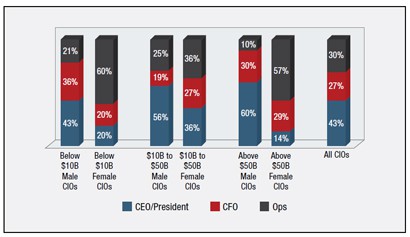 We find no differences in reporting structure for insiders vs. outsiders. However, among insider CIOs, those with relatively short tenure with the company (ten years or less) are more likely to report to an operations officer, while those with very long tenure (over 20 years) are more likely to report to the CFO. Interestingly, CIOs whose backgrounds and experience are primarily in other business functions-not in IT-are significantly more likely (62%) to report to the CEO/ President. These may be cases where the CEO seeks to inject greater business orientation into the IT organization and where the IT role may be a stepping-stone for business executives.

Figure 8: Reporting Structure by Business vs. IT Background