Boards as Strategic Weapons - Board Members Educational Backgrounds (>$1b)

What educational backgrounds do board members of fast growth software companies have? 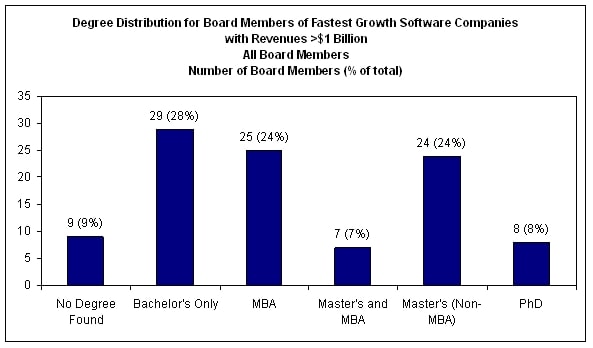 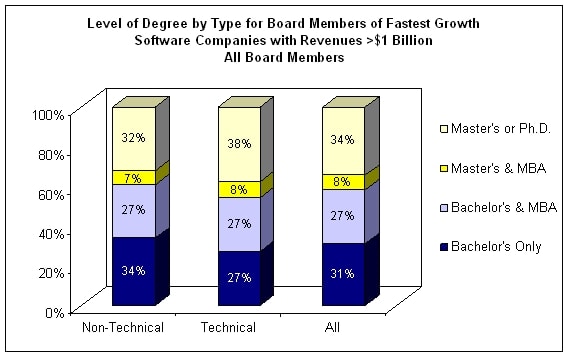 Only 29 of the 93 board directors did not move beyond the baccalaureate level. Noteworthy is the fact that the highest concentration of bachelor’s-only directors is at VMware. Four of the company’s eight board members only hold a bachelor’s degree.

By contrast, seven companies have Ivy Leaguers on their boards. The highest concentration of Ivy League status board directors is at Symantec. Sixty percent of Symantec’s board members having at least one degree from an Ivy League school.

What Universities did they attend?

Ten graduated from Harvard University, five graduated from Oxford and five graduated from the Indian Institute of Technology and Indian Institute of Management. Indeed, there is a strong international university presence among the board directors, with executives coming from Ivy League schools in the United States, as well as major institutions in India, France, South Africa, Germany, Switzerland, London and Italy. In all, board members in our study came from 93 different universities from around the world.

Four board members at the software companies we studied have military backgrounds.

(Note: Of the 102 board members researched, degree backgrounds for nine directors could not be found. Most of these board members belong to companies in India, The UK, The Netherlands, and France)

*This list of companies originated from the 2008 Software 500 ranking by Software Magazine. They are the fastest growth companies over $1 billion identified in that listing.

More in this category: « Women Appointed to Technology Boards June 14 to August 13 2011 Broadcom, Expedia & Others name Women to their Board of Directors »