Summary and Stats for Tech CEOs

29 were external appointments and 30 were internal promotions 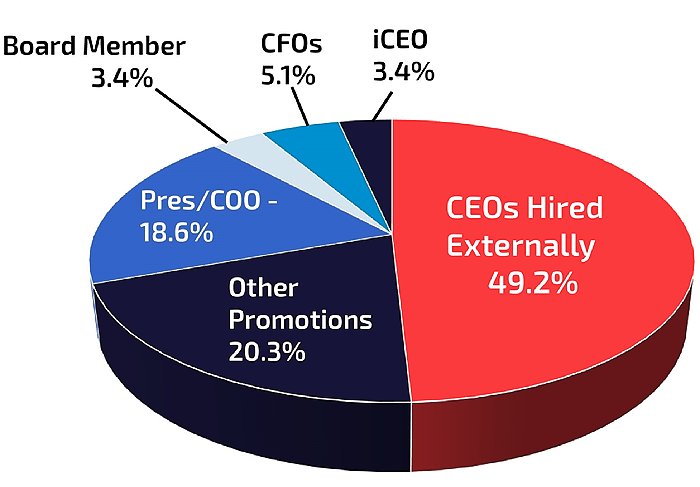 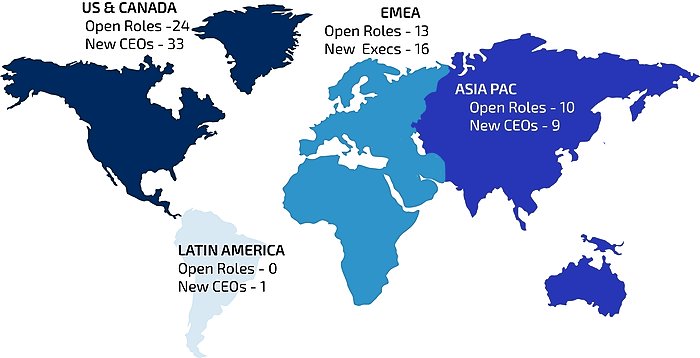 Commvault Systems, New Jersey, May 2018 - Commvault Board of Directors have determined that it is the appropriate time to begin a search for a new CEO to lead the company through its next stage. The Commvault Board will appoint a search committee and will retain an executive search firm to assist with the external search. Neil Robert Hammer will continue to lead Commvault as Chairman, CEO and President until his successor is appointed.

Stratasys, Minnesota, May 2018 - Ilan Levin has decided to step down from his positions as CEO and Director. Elchanan (Elan) Jaglom, the company’s current Chairman of the Board, will serve as CEO until a successor is appointed. The company is engaging an international executive search firm to help identify a new CEO.

BSQUARE, Washington, May 2018 - Jerry D. Chase has stepped down as President and CEO and Kevin Walsh, the company's VP of Marketing, has been appointed as the company's acting CEO.

Airgain, California, May 2018 - Airgain announced that President and CEO Charles Myers will be leaving the company to pursue other opportunities. Chairman James K. Sims will assume the role of Interim CEO as the company searches for a new permanent CEO.

Gopher Protocol, California, May 2018 - Mansour Khatib, Chief Marketing Officer and director of the Company, was engaged as Interim CEO to fill the vacancy resulting from Gregory Bauer’s resignation as CEO.

Namely, New York, May 2018 - Namely announced the departure of Matt Straz as the company's CEO. Board member Elisa Steele will lead the Office of the CEO.

TDC A/S, Denmark, May 2018 - Pernille Erenbjerg will resign as Group CEO and President, and hence is prepared to support the new owners in a transition period until a new Group CEO has been appointed.

Netia S.A., Poland, May 2018 - Katarzyna Iwuc resigned from her position as CEO and Director General.

Cherry AB, Sweden, May 2018 - Anders Holmgren as CEO and President, will leave the company and the Cherry Group. Gunnar Lind is acting CEO and will remain in this position to ascertain that the group develops according to plan until a permanent CEO is appointed.

Net Insight, Sweden, March 2018 - Net Insight announced that Henrik Sund has been appointed as interim CEO during the period until the permanent new CEO starts. The Board of Directors has initiated the recruitment process for his replacement.

Efecte Oy, Finland, May 2018 - The company has started the search for a new CEO aiming for an orderly CEO change by the end of the year. If necessary, the CFO Hannu Nyman will act as the CEO during the possible transition period.

Xerox Corporation, Connecticut - Xerox has appointed former HP and IBM exec John Visentin as CEO and vice chairman. Most recently senior advisor to the chairman of Exela Technologies and an operating partner for Advent International. Visentin was consultant to Icahn Capital in connection with a proxy contest at Xerox.

Cogeco, Quebec, Canada - Philippe Jetté has been appointed to the position of President and CEO of both public companies Cogeco Inc. and Cogeco Communications Inc. He has led his own consultancy firm before joining Cogeco as SVP  and Chief Technology and Strategy Officer in 2011.

Model N, California - Model N named Jason Blessing, as Model N's CEO. Since January 2018, he has served as an enterprise software consultant. Previously, he served as the CEO of Plex Systems.

Instart Logic, California - Instart Logic reported the appointment of Sumit Dhawan as CEO. Dhawan comes to Instart from VMware, where he served as general manager of the $1.5 billion-in-revenue end-user computing business.

DataPath, Georgia - DataPath appointed Dr. Sherin Kamal as the company's new President and CEO. He most recently served as Chief Engineer and Senior Director of Technical Services at SAIC.

PierianDx, Missouri - Michael Sanderson has been appointed CEO and director of the board of PierianDx. Sanderson will develop and execute the company's strategy for molecular labs and the health care delivery market.

Authentix, Texas - Authentix announced that Kevin McKenna will become its next President and CEO. McKenna joined the Company's executive team in 2012 and most recently served as the Chief Sales and Services Officer.

Magna5, Texas - Magna5 introduced Richard (Rick) Lottie, an IT and telecom services veteran of more than 30 years, as its new CEO. Lottie has served as Magna5 Executive Chairman and Board Member for the past six months, and is replacing Greg Forrest, has recently stepped down.

Clearwater Compliance, Tennessee - Steve Cagle will take over as CEO of the health care cyber-risk-management company. Cagle was previously CEO of Moberg Pharma North America Alterna and was a founding team member of Sparta Systems.

Phrame, California - Phrame announced Charlene Consolacion as CEO. She is a co-founder at Phrame, joining at inception in 2016 as COO.

Validity, Massachusetts - Validity has appointed Mark Briggs as chairman and CEO to be based in its Boston office, US. Prior to joining Validity, he served as the CEO of ABILITY Network.

Hostelworld Group Plc, Ireland - Gary Morrison will become the Group's new CEO and director. Gary joins the Group from Expedia where for the last seven years he served in a number of roles, most recently as Head of its Retail Operations.

Magal Security Systems, Israel - Dror Sharon will be joining as CEO, following a successful career as President and CEO of CONTROP Precision Technology.

M-Brain, Finland - M-Brain has appointed Christian Cedercreutz CEO. Christian most recent role has been to lead the cognitive SW solutions (Watson) business in Finland at IBM.

CrowdProperty, United Kingdom - CrowdProperty has appointed Mike Bristow as its CEO. Prior to this appointment, Bristow worked for Growth Strategy as its managing partner.

Nintendo, Japan - Tatsumi Kimishima is stepping down as president. Board member of both Nintendo and The Pokémon Company Shuntaro Furukawa who will assume the role around E3 time.

HKBN, Hong Kong - NiQ Lai, the current COO and an Executive Director, will assume the role as the CEO.

China Innovationpay, Hong Kong - Zhu Ning has been appointed as an executive Director and the CEO of the company. Mr. Zhu is the founder and the CEO of Youzan Group (comprising Qima Holdings Ltd. and its subsidiaries).

www.vell.com
email - This email address is being protected from spambots. You need JavaScript enabled to view it.
Main: 617-416-9088