We endeavor to catalog all open technology CEO roles (as of 10/31/2017) and latest appointments for the month of October 2017.

The average length of time the searches are open is 4.4 months, up from 4.09 months earlier this year. There is little variance across geographies. 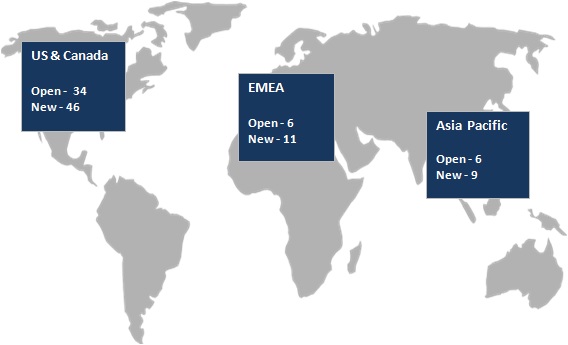 8% of the CEOs appointed were COOs or President or EVP - Operations, 8% were current board members, CFOs were 3%, iCEOs were 4%, 20% other internal executives and 57% external appointments. 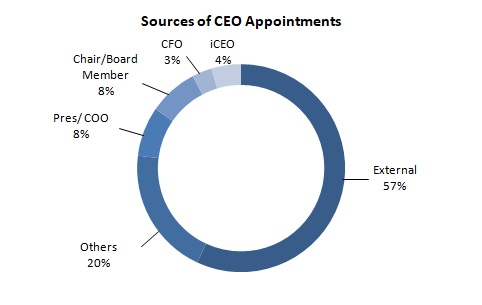 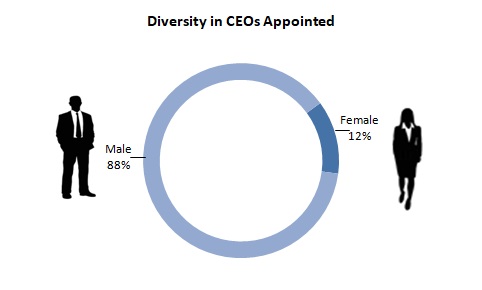 Want to keep up to date? Get more updates on new board members (Tech execs on tech and non-tech boards; women board members), on new execs/board updates for the Giants, the software industry, and many more. A summary of Vell Research Reports and board/exec updates can be found here.

Intellicheck, New York, October 2017 - Intellicheck announces the appointment of Bill White as interim president and CEO and the departure of William Roof.

Ancestry.com, Utah, September 2017 - Ancestry.com CEO Tim Sullivan is stepping down. CFO and COO Howard Hochhauser will assume the role of interim CEO as the company conducts a search for a permanent replacement.

Social Finance, California, September 2017 - CEO Michael Cagney will be stepping down at the end of the year.

Nexus Enterprise Solutions, Florida, October 2017 - James Bayardelle, was appointed as the company's CEO, until a new CEO is appointed.

Qlik Technologies, Pennsylvania, October 2017 - Qlik announced that Lars Björk, CEO, has transitioned his responsibilities to David Murphy as interim CEO. A search is underway to find a permanent CEO.

Samsung Electronics, South Korea, October 2017 - The CEO of Samsung Electronics and Samsung Display Kwon Oh-Hyun resigned from both the units, leaving in March 2018. Samsung has not yet announced a replacement.

BPS Technology, Australia, September 2017 - Trevor Dietz, CEO of BPS, has advised the board of his intention to retire in the new year.

John Wiley and Sons, New Jersey - Brian A. Napack has been named its new President and CEO. He comes to Wiley from Providence Equity Partners where he has been a Senior Advisor focused on investments in education and media.

Avigilon, British Columbia, Canada - James Henderson was promoted to President and COO, and named future CEO, as part of a succession plan. Founder & CEO Alexander Fernandes will then become Chairman.

Telestream, California - Telestream's CEO and one of the company’s original founders, Dan Castles, is retiring. Ex-Cisco executive Scott Puopolo will take over the CEO position.

InsPro Technologies, Pennsylvania - David M. Anderson becomes the CEO of the company. Joins from SCOR Global Life where he was a SVP and head of US individual life reinsurance.

MassRoots, Colorado - The board appointed VP Scott Kveton as the company's CEO.

TimefireVR, Arizona - Board member Jonathan Read to serve as CEO, Secretary, and Treasurer of the Company.

Truli Media Group, New Jersey - Miles Jennings named as the company’s new CEO and a director. Mr. Jennings founded and is currently the CEO of Recruiter.com.

Grey Cloak Tech, Nevada - Patrick Stiles, age 33, was appointed to Board of Directors and as CEO and President. Stiles has been the CEO and Co-Founder of Eqova Life Sciences.

Thought Stream, California - Peter Jackson has been appointed as the new CEO of the company. Jackson was CEO and co-founder of Ziploop.

Wadena, California - Wadena appointed J. Jacob Isaacs as a Director of the Company and as its President, CEO, CFO and Secretary. Former CEO Cumberland Hills.

Appthority, California - Appthority announced that Anne Bonaparte has joined the company as its new CEO. Former president and CEO of BrightPoint Security.

Apto, Colorado - Apto hired Angela Tucci as CEO. Tucci was most recently at CA Technologies, where she served as general manager of the Agile Management business unit.

CSDC Systems, Ontario, Canada - CSDC has appointed global tech and software veteran Erin Mulligan Nelson as CEO. She joins CSDC from SunPower, where she was EVP and CMO.

Secure64 Software, Colorado - Thad Dupper has been appointed CEO and will join the company's Board. Most recently, he was Chairman and CEO of Evolving Systems.

Seamless Distribution, Sweden - John Longhurst, currently Chairman of the Board, named as new CEO of Seamless.

Teridion Technologies, Israel - Teridion has hired Saar Gillai as CEO to lead it through its next growth phase. Former SVP and GM of HPE’s Communications Solutions Business.

Quench Technology, United Kingdom - The company has appointed Mark Van Walwyk as the new CEO. Walwyk is an industry veteran, having spent 16 years in senior positions at GfK.

Huddly, Norway - Huddly has promoted the product design and collaboration industry expert Jonas Rinde, well known in the industry as the co-founder of Spark Board, to the position of the company's CEO.

NetComm Wireless, Australia - Interim CEO Ken Sheridan has been appointed as MD and CEO of the company.

Novita Healthcare, Australia - Glenn Smith named as CEO of the company. His most recent leadership position was CEO at SpotJobs.

Freecharge Payment Technologies, India - Axis Bank has acquired Freecharge and Sangram Singh, Axis' SVP for card and payments business, has been appointed as the CEO of the unit.