We find differences between insider CIOs and those who join the company to assume the role. 56% of the CIOs were insiders, 44% newly joined. Note that we group with the insider CIOs two executives who made lateral moves into the role from running business units, as well as a CFO who assumed the CIO responsibility when the CIO role was eliminated.

Figure 9: Insider vs. Outsider by Gender

Insider CIOs are overall a little younger than outsiders, and insider CIOs hold more advanced degrees, including MBAs. Strikingly, 70% of the female CIOs were insiders; only 30% joined. Among the males, 52% were outsiders, and 48% were insiders. This difference likely reflects the fact that women tend to be less inclined to job hop, even for a promotion. It could also be that fewer women are selected, even when they do chose to participate in an external selection process.

Larger companies are apt to promote from within. They have more staff to choose from and more developmental opportunities to offer, thus more inside candidates. As mentioned, there are no differences to speak of in the reporting structure for insiders vs. outsiders. 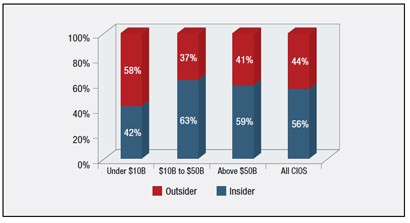 The insiders show an interesting distribution of tenures with their companies. There are three pronounced groupings at 0-5 years, 11-15, and over 20. The third represents the promotion of executives who have worked their way up through the ranks, which is common among larger companies. The middle group contains high-potential executives who have proven their capability and are ready for the next step. The short-tenure group contains some executives recruited from outside to be mentored, groomed and proven before advancing to the CIO role. More than half of these executives have tenures of less than two years, so they have much in common with the outsider CIOs. Hiring a CIO understudy makes sense when the new CIO is making a big step up; highly experienced CIOs would typically not be interested in the arrangement.