Sixteen corporations had the roles of Chairman and CEO combined since the beginning of 2000, and in some cases much longer. They include some of the largest U.S. companies, notably the three largest in the energy sector.

These companies tend to have long-tenured CEOs. Seven of them have had no top leadership transitions since 2000, seven have had but one transition, and only two have had two transitions. They average less than one CEO change. In several of the companies – Amazon, Berkshire Hathaway, FedEx, State Farm – a founder or long-time leader remains in charge. Next to Warren Buffet at Berkshire (1970), the longest-serving Chairman and CEO is Edward Rust at State Farm (1987). Berkshire’s governance guidelines include the note that “The Company does not anticipate that the Chief Executive Officer will retire other than due to disability.”

These organizations also tend to have deliberate succession planning and grooming of successors, sometimes with an “heir apparent” and sometimes with a competition among strong candidates. For example, succession at General Electric is followed closely in the press, and the “losers” generally go on to become CEOs at other major companies. In all the leadership changes in these companies since 2000, an insider was promoted to be the new Chairman and CEO. 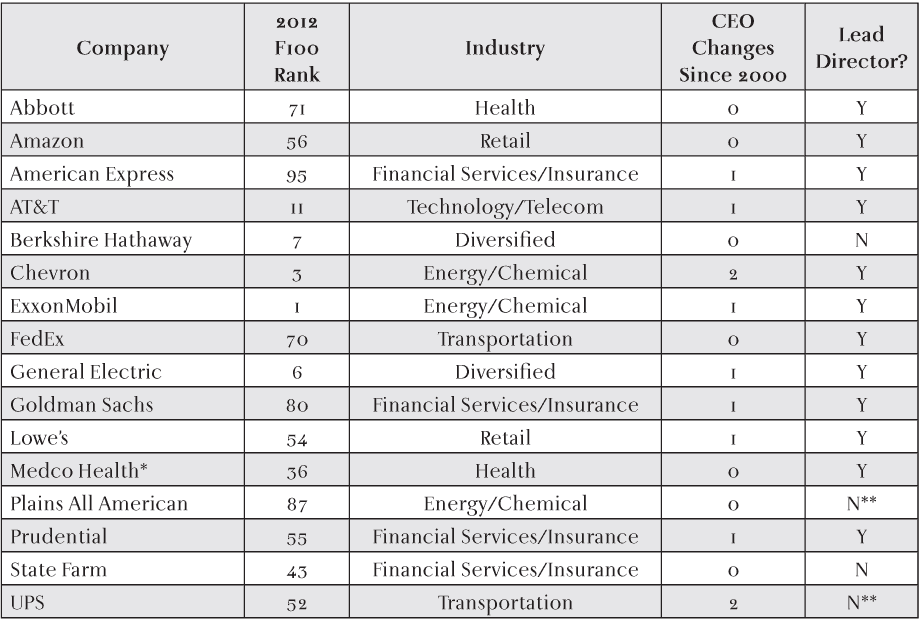 *     Medco Health had a single CEO-and-Chairman from the time it was spun of by Merck in 2003 until it was acquired by Express Scripts in 2012.
**  Rotating Presiding Director, no designated Lead Director.

In keeping with prevailing practice and governance recommendations, most of these companies have independent Lead Directors, as specified in corporate governance guidelines. The exceptions are Berkshire Hathaway, Plains All American, State Farm, and UPS. Berkshire has a high proportion of ownership by insiders, Plains is structured as a limited partnership, and State Farm is a mutual insurance company (policyholders are shareholders). Plains and UPS designate Presiding Directors for purposes of presiding at the meetings of independent directors, with the role rotating.

The corporate governance guidelines of these companies show a variety of stances toward combining the Chairman and CEO roles.
General Electric’s guidelines state simply: “The CEO serves as the chairman of the board. The independent directors have appointed the chairman of the management development and compensation committee to serve as the presiding director.”

Three of the companies state the preference for combined roles but officially leave the decision to the board:
The most common approach is to specify without preference that the board determines whether to combine the roles, but these guidelines vary in emphasis:

UPS in its proxy statement details its approach to Presiding Directors: “We do not have a lead director, but our Corporate Governance Guidelines provide that our non-management directors will meet in executive session without management present as frequently as they deem appropriate, typically at the time of each regular board meeting. The chairs of the independent board committees rotate as presiding director, and the presiding director acts as a liaison between the non-management directors and the Chairman and Chief Executive Officer after each executive session.”

Berkshire Hathaway and State Farm make no mention of leadership role structure in their posted governance guidelines. Berkshire’s proxy statement simply declares that “The Board of Directors has not named a lead independent director.”