Twenty-one companies had Chairman and CEO roles combined (officially or de facto) at the start of our analysis period and, after a single structure change (but perhaps several leadership changes), have the roles split today. Shareholder pressure to split roles played a part in a few of them, notably Hess and Bank of America.

Seven companies, four of them technology leaders, split roles with company founders or founding family members involved in the transition:

A half dozen of the splits were driven by leadership crises with the underlying causes the financial crisis, business performance, or executive conduct problems.

A dramatic split occurred at Fannie Mae in 2004 when Chairman and CEO Franklin Raines was forced to resign by Federal regulators amid multiple criminal and civil investigations into financial reporting irregularities, plus class-action lawsuits by investors. The primary regulator had been in the process of proposing governance improvements including a split of roles, but the split occurred immediately upon Raines’s resignation. Daniel Mudd became CEO, Stephen Ashley Non-Executive Chairman. The split in no way guaranteed effective governance. In the run-up to the subprime mortgage crisis Fannie Mae purchased or guaranteed $270B of risky mortgage loans. In 2008, both Mudd and Ashley were dismissed and Fannie Mae went into government conservatorship. The case against Raines was dismissed in 2012.

The situation at Freddie Mac was similar, but the structure change was timed differently. In mid-2003, Chairman and CEO Leland Brendsel and other senior officers resigned in the wake of regulators’ investigations of financial reporting irregularities. The roles were temporarily split for the rest of the year until a new Chairman and CEO, Richard Syron, was appointed. In 2008, triggered by the subprime mortgage crisis, Fannie Mae also went into government conservatorship. Syron was immediately removed and the roles split: David Moffett became CEO, John Koskinen Chairman. Moffett’s tenure was brief, and there have been subsequent management shake-ups, but the roles remain split.

At Bank of America, the roles were split to increase board oversight and rein in an overreaching CEO. Kenneth Lewis was Chairman and CEO until 2004 when Bank of America merged with FleetBoston. The roles were then split briefly to accommodate the respective leaders. Lewis remained CEO of the combined corporation, and Clark Gifford, FleetBoston’s Chairman and CEO, became its chairman. Gifford retired eight months later, and Lewis added the Chairman role. During the subprime mortgage crisis Bank of America made two risky acquisitions in Merrill Lynch and Countrywide Financial.

Upset over the purchase of Merrill Lynch, shareholders voted in 2009 to separate the roles of Chairman and CEO. The board immediately met and elected Walter Massey, President of Morehouse College, as Chairman but voted to retain Lewis as CEO. At the end of the year, and under threat of indictment for withholding crucial information from shareholders, Lewis retired. He was replaced by Brian Moynihan, who serves as CEO today. In 2010, the board affirmed its preference for an independent Chairman. Charles Holliday was appointed to replace Massey and continues as Chairman today.

In 2006, William McGuire, longtime (since 1991) Chairman and CEO of UnitedHealthcare, was forced to resign amid allegations of backdating stock options. The roles were split. Stephen Hemsley, formerly President and COO and already a board member, became CEO. Richard Burke, a founder and former Chairman and CEO of the company, assumed the duties of Non-Executive Chairman.

Gary Forsee succeeded William Esrey as Chairman and CEO of Sprint in 2004. Esrey and COO Ron LeMay had been ousted in the wake of a scheme to avoid income taxes on their stock options. After engineering the 2005 merger with Nextel and seeing the company’s performance decline dramatically (including taking a $31B write-off associated with the merger), Forsee was ousted by the board in 2007 (with a generous severance package) and went on to run other telecommunications companies. He was replaced by current CEO Daniel Hesse, who has received awards for corporate responsibility, and James Hance as Chairman. When Softbank acquired Sprint in 2013, its CEO, Masayoshi Son, became Chairman.

Several of the splits came about with executive transitions, and the board saw the necessity or opportunity to divide the roles:

At the point of splitting roles, 15 companies promoted insiders to be CEO, and four appointed outsiders (though Delta’s was already a board member). Since the point of splitting, there have been eight CEO changes at these companies – four insiders and four outsiders. But the ratio is skewed by Freddie Mac, which has appointed outsiders at all four of its CEO changes since 2000, two of them since splitting the roles in 2008.

These companies have had the same average number of CEO changes (1.8) since 2000 as the Always Split companies. But that of course includes CEO changes prior to their splitting roles.

Six of the eight companies where the Chairman is an insider have independent Lead Directors. The exceptions are Oracle and Sprint. UnitedHealthcare has company founder and former Chairman and CEO Richard Burke now designated as independent and serving as Non-Executive Chairman. 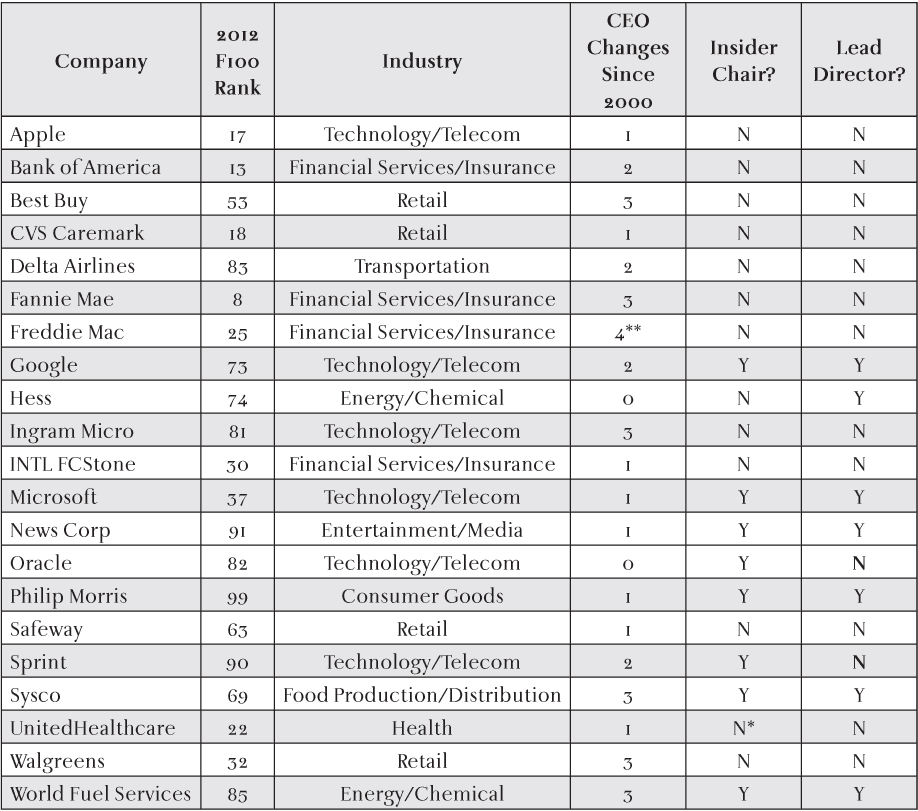 * Founder and former Chairman and CEO is designated as independent Chairman.
** Not counting interim CEOs.

The following chart summarizes our assessment of the primary drivers at the time of the actions to split roles in these companies. The most common driver is an effort to improve the leadership team and reward a capable executive with promotion. The other common drivers include sudden executive departure, poor business performance, and scandals involving management. The board’s desire to improve governance and increase its independence is perhaps a stronger force than meets the eye, since boards are naturally reluctant to publicize that need or intention.

Having split the Chairman and CEO roles, half of these companies revised their corporate governance guidelines to affirm the change. Fannie Mae’s guidelines state simply, “The positions of Chairman of the Board and CEO are separate and the Chairman is an independent director.” Guidelines at Freddie Mac, Hess, Safeway, and UnitedHealthcare read similarly.

Several companies strongly affirm the role split, for example:
Like most of the companies with Chairman and CEO roles combined, many of these companies give the board flexibility in determining the structure. As an example, the Philip Morris guidelines state:

The Board does not believe that any particular leadership structure is inherently superior to all others under all circumstances. Rather, it believes that it is important to retain its flexibility to allocate the responsibilities of the positions of the Chairman of the Board (the “Chairman”) and Chief Executive Officer in the way that it believes is in the best interest of the Company under the then prevailing circumstances. The Board currently believes that it is in the best interest of the Company to separate these positions as part of the Company’s leadership transition.

Oracle emphasizes that it has no policy: "While the Board recognizes the potential value of splitting the roles of Chairman and Chief Executive Officer (the “CEO”) and of requiring a lead director, we currently have no policy mandating this. The Board believes that a number of non-management directors fulfill the lead director role at various times depending upon the particular issues involved."

Google’s guidelines call for a super-majority of independent directors in order to elect an insider as Chairman (as it now has): "The Board will select the chairman of the Board and the chief executive officer in compliance with Google’s Certificate of Incorporation and Bylaws, which provides that the chairman of the board will not be a current employee of Google, or someone employed by Google any time within the prior three years, unless the appointment is approved by two-thirds of the disinterested directors."

Guidelines at Bank of America and News Corp make no mention of Chairman-CEO role structure, but they affirm their current structures in their annual proxy statements, Bank of America quite strongly: "Our Board believes that its current leadership structure, in which the positions of Chief Executive Officer and Chairman of the Board are held by two different individuals, is appropriate for our company at this time because our Chief Executive Officer and our Chairman of the Board fulfill separate and distinct roles."

Apple’s proxy statement also stresses the difference in role: "The Board also believes the current separation of the Chairman and CEO roles allows the CEO to focus his time and energy on operating and managing the Company and leverages the Chairman’s experience and perspectives. The Board periodically reviews the leadership structure and may make changes in the future."

With regard to Lead Directors, the guidelines at most of the companies with independent non-executive chairs simply specify that the Chairman presides at meetings of independent directors or doubles as the Lead Director.

Walgreens guidelines make the election of an independent board leader optional: "The Board may designate a non-executive Chairman or Lead Director from among its independent directors. The Chairman or Lead Director’s role is to strengthen the communications between the Board and the Chief Executive Officer, and to enhance the Board’s oversight role."

Finally, Google’s guidelines make a single passing reference to the “Lead Independent Director” without specifying what the role entails or when it is needed.