CIO Succession - About the Research Featured

All companies are over $4B in 2011 revenue (revenue figures are from the Fortune 500 list whenever available). Average company revenues are $40B, and the median is roughly $15B. Average revenue is skewed by the presence of Walmart at $447B. Five other companies are over $100B: General Motors, Hewlett-Packard, Bank of America, CVS/Caremark, and IBM. We divided the companies into three groups in order to note any strong contrasts by company size.

As the regional distribution chart shows, we focused on companies based in the U.S. or based in Europe and with a strong U.S. presence. Many of the companies are global in their markets and operations. The highest concentration of companies is in the Northeast.

Figure 2: Number of Companies by Region

The companies span many industries, with the highest representation in financial services, where changes in the executive ranks are perhaps a by-product of the economic downturn and recent industry turmoil. 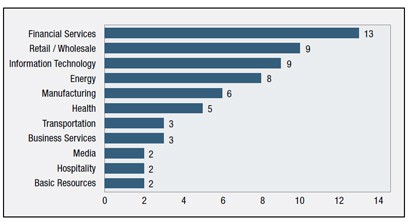