We've mentioned a variety of correlations to company size. In this section, we summarize them.

Large company CIOs tend to be older, with 65% of them over 50 years old. That's expected, not only because it may take longer to come up through the ranks, but also because large companies seek very experienced executives, whether internally appointed or brought in. Companies over $10B appoint proportionally more women as CIOs. A plurality of the CIOs in each of our company size segments report to the CEO/President, and that happens most often-nearly half the time-in the $10-50B segment. Smaller companies are most likely to have the CIO reporting to a CFO or operations executive. 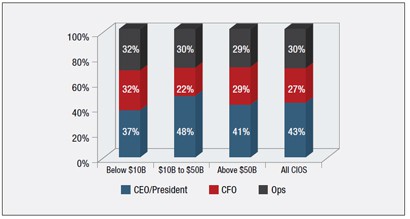 Medium and large companies are more likely to promote the CIO from within, and the 14-year average tenure of insider CIOs in large companies is double that of insider CIOs in smaller companies. Medium and large companies are also much more likely to appoint CIOs whose primary background is outside IT-all of the CIOs in our under $10B segment have primarily IT backgrounds. However, small company CIOs tend to have more advanced degrees, including more MBAs. So larger companies tend to rely more on experience gained in house, while smaller ones rely more on outside education to gain business breadth.