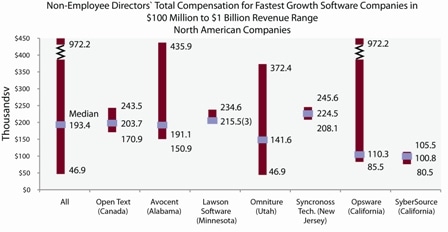 The median financial compensation to a board member in the United States and Canada is $193,400.

At the same time, the highest compensated of all directors in our study is at Opsware, a software development company that delivered server and network device provisioning, configuration and management. Opsware co-founder Marc Andreessen, who also founded Netscape, was awarded $972,185 in total compensation. This is an example where the board was willing to pay a premium to proven, veteran leadership. The investment paid off when HP acquired Opsware in 2007 for $1.6 billion cash. It is to be noted that his cash compensation was phased down from $260,000 to $180,000, perhaps noting his lower level of involvement with the company over time.

The second highest-compensated board member at companies in the $100 million to $1 billion range in North America is $435,882 while the lowest paid director receives $46,929 for his service to the board.

It’s interesting to determine what distinguishes the highest-paid directors from the lowest-paid directors. Avocent Corp. pays its top director $435,882. Avocent is a public company that delivers IT operations and infrastructure management solutions for enterprises worldwide. Its clients include Microsoft and Sprint. Avocent’s lowest-compensated director receives $187,716, which is more than what about half of the directors on other boards in the study receive. Avocent, then, clearly believes in attracting heavy hitters like Edwin Harper, who is also on the board of Ditech and has over 30 years of experience in the technology industry.

Avocent’s aggressive compensation strategy seems to have paid off, not only with the ability to acquire and retain Blue Chip clients, find a place on S&P Midcap 400 and the NASDAQ Global Select, but through financial results. Despite a down economy, Avocent reported sales of $137.6 million in the third quarter of 2009, rebounding from $128.6 million in the second quarter as it finds ways to add value to its clients during a recession. And in October 2009, Emerson acquired Avocent for $1.2 billion.

One noteworthy observation on the financial compensation front is regional differences. 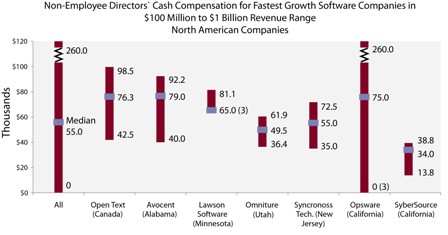 For example, California-based companies compensate directors the least. This seems counterintuitive considering the state’s reputation as a software development hotbed.This is also in line with our 2007 Entrepreneurial Boards survey where we discovered companies that are in Massachusetts also pay their directors less overall. Perhaps being in a technology hotbed increases the competition for board seats. If the company is remote, then more thought may be put into which directors to attract and therefore national candidates are considered and compensation is higher.

Marc Andreessen’s cash compensation, as noted above, was being phased down from $260,000 to $180,000 over two years, presumably reflecting his lower level of involvement in the company over time.

The second highest cash compensation is $98,500 from Open Text, an enterprise content management software developer in Canada. By contrast, the lowest cash compensation is $13,750 at CyberSource, a credit card processing solutions firm in Mountain View, Calif. This indicates that some level of cash investment is required to attract board members at fast-growth software companies.

In the 2008 Silicon Valley Board Index, cash retainers for directors have increased by 5 percent to $37,300 since 2007 and by nearly 50 percent since 2003. Interestingly, the smallest companies in the index saw the largest jump over the past year. The average cash retainer for companies with revenues of $250 million or less increased by 47 percent to $32,200. The total cash for Silicon Valley Companies is around $46,600 on the average (including retainer and meeting fees). 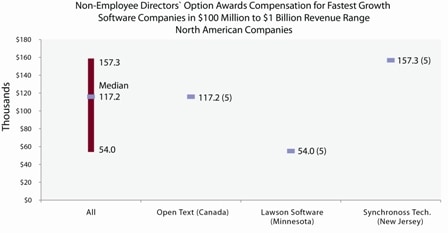 Lawson Software, for example, offers an average of $53,953 in option awards compensation to its directors and an average of $94,716 in stock awards. Although both figures are low compared to most other companies in this study, the combination of options and stock seems to be a suitable strategy for Lawson. The St. Paul, Minnesota company provides software and service solutions to 4,500 customers in manufacturing, distribution, maintenance and service sector industries across 40 countries.

Still, Lawson and Synchronoss are exceptions to the rule and among only three companies in the top 10 that offer options awards. Open Text is the third, offering an average of $117,193 in options awards to its directors, compared to $53,953 for Lawson Software and $157,300 for Synchronoss.

By comparison, in the 2008 Silicon Valley Board Index, the average total value of annual equity – including annual options, restricted stock grants and restricted stock units –was $196,000. The median value is $171,000. 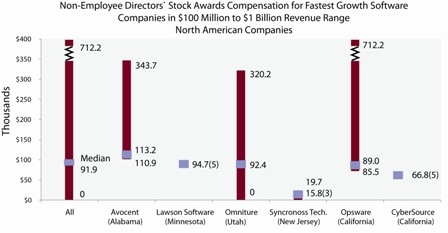 Of the 10 fast-growth software companies we studied only two companies offer retainer only compensation models. Other companies – Synchronoss, Omniture, Avocent and Open Text – offer a retainer plus meeting fees.

Clearly, the retainer plus meeting fee is the preferred model for fast-growth software companies, but the fees vary widely (per table above), and meeting fees have less of a range. In the Silicon Valley Board Index, we see that 94 percent of companies pay a cash retainer and that 40 percent of them (a declining number) provide a per meeting retainer fee. In the S&P 500, the cash retainer plus per meeting fee model is more common. The average per meeting fee for the Silicon Valley group (that includes companies of all revenue sizes)is $1,850, slightly above our average. For companies under $1 billion, the average is around $1,750.