Welcome to our Technology CEO Transitions Newsletter. We endeavour to catalogue all open technology CEO roles (as of 7/31/2017)  and latest appointments for the month of July 2017. THREE TWEAKS TO THE SET OF COMPANIES

#1 - Including more smaller companies, especially if they are a trend or just we deem cool.

#2 - Including more North American companies that some of you may or may not consider "tech" but are definitely getting a big footprint in digital  / tech.

#3 -  Increasing the size cut-off for companies that are not in North America/ EMEA and don't have a specific interesting trend of coolness factor.

The average length of time the searches are open is 2.97 months, down from 3.8 months earlier this year. There is little variance across geographies. 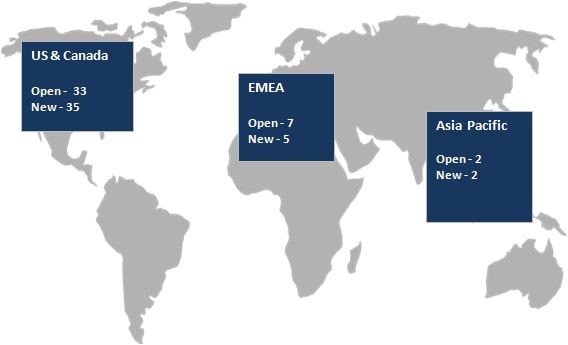 19% of the CEOs appointed were COOs or President or EVP - Operations, 3% were current board members, 21% other internal executives and 57% external appointments. The average length of time the CEO searches have been open is 2.97 months, down from 3.8 months earlier this year. There is little variance across geographies. Uber Technologies, California, June 2017 - Uber Co-founder Travis Kalanick, 41, has stepped down as CEO of the ride-hailing service following intense pressure from investors Kalanick will, however, stay on the company's board.

HSN, Florida, April 2017 - Mindy Grossman, 59, resigned as CEO of the Home Shopping Network to join Weight Watchers as CEO. The Board has established an Office of the CEO.

Lexmark International, Kentucky, June 2017 - President and CEO David Reeder, 42, has resigned for personal reasons. In the interim, Lexmark will be led by a management team consisting of Brock Saladin, SVP and chief revenue officer, and Allen Waugerman, SVP and CTO.

Nuance Communications, Massachusetts, November 2016 - Chairman and CEO Paul Ricci, 61, intends to retire at the end of first half of fiscal 2018. Nuance has speech and image software products, with the aim to recognize human language.

Cree, North Carolina, May 2017 - Chairman, President and CEO Chuck Swoboda, 50, intends to stay on until a successor is appointed to the LED Lighting, Chips and Components company.

Pandora Media, California, June 2017 - Tim Westergren, 51, stepped down as CEO & board member of the music streaming service company in June 2017. He will likely stay on at the company he founded 17 years ago until a new CEO is in place. The company has commenced a search for a successor and appointed CFO Naveen Chopra as interim CEO.

Endurance International, Massachusetts, April 2017 - CEO Hari Ravichandran, 41, will remain CEO while the company conducts a search to identify his successor. Endurance has grown into an international family of brands that provides small business owners with the tools they need to establish and build their web presence, get found in online search, and connect with customers through social media, email marketing, and more.

Ultra Clean Holdings, California, July 2017 - UCT SVP and CFO, Sheri Brumm, 46, will serve as acting CEO as President and CEO, Jim Scholhamer, 51, will take leave of absence. Ultra Clean Holdings is a leading developer and supplier of critical systems and subsystems for the semiconductor capital equipment and flat panel industries.

TiVo, California, May 2017 - President and CEO, Thomas Carson, 57, intends to retire when a successor is appointed at the digital video recorder and streaming media player company.

Ellucian, Virginia, July 2017 - Ellucian President/CEO Jeff Ray, 62, has retired. The company is in search for its next CEO for the edtech software leader serving the higher ed market.

CPI Card Group, Colorado, April 2017 - CEO and President Steve Montross, 64, will be retiring from the provider of integrated payment solutions to credit and debit card issuers.

Nanometrics, California, May 2017 - President and CEO, Dr. Timothy J. Stultz, 69, plans to retire. The company has retained Spencer Stuart to identify a successor.Nanometrics is a leading provider of advanced, high-performance process control metrology and inspection systems used primarily in the fabrication of semiconductors and other solid-state devices, such as data storage components and discretes including high-brightness LEDs and power management components.

Edgewater Technology, Massachusetts, March 2017 - Chairman Jeffrey L. Rutherford, 56, is Interim President and CEO of the business and IT consulting firm.

MMRGlobal, California, June 2017 - Robert H. Lorsch, Chairman, President and CEO of the company, died unexpectedly at the age of 67. The CEO role at the online personal health records (PHRs) and storage solutions company is still not filled.

Lavu, New Mexico, June 2016 - Marc Chesley has stepped down as the CEO of Lavu, the iPad point of sale system firm.

INTREorg Systems, Texas - June 2017 - David M. Beach tendered his resignation as president, CEO and a director from the consulting and software as a service (SaaS) provider offering services, including shareholder analytics, analytics consulting and IT services.

Tinder, Texas, July 2017 - Greg Blatt will stay on as CEO of Tinder, the social search mobile app firm that facilitates communication between mutually interested users, until a replacement is named.

Forbidden Technologies, UK, February 2017 – CEO Aziz Musa, 36, has resigned from the cloud-based video post-production platforms provider. Chairman David Main, will, on a short term basis, be taking on the CEO's responsibilities whilst the search for a new full time CEO is on.

Ciber, Colorado - CFO Christian Mezger,48, to serve also as President and CEO for the IT consulting, managed services, IT application development and IT outsourcing company.

Westell Technologies, Illinois - Matthew B. Brady, 49, is the new President and CEO at the leading provider of high-performance wireless network infrastructure solutions. Most recently SVP of the Safety and Security Systems Group (SSG) of Federal Signal Corporation.

Valuesetters, Connecticut – Valuesetters, provider of chess.net for online chess, announced that Manuel Teixeira resigned from the board and as CEO. Business strategy consultant Cecilia Lenk, accepted the position as CEO.

Mediware Information Systems, Kansas – The company named Bill Miller as CEO for the clinical and performance management information software systems. Most recently, CEO of OptumInsight at Optum, a subsidiary of UnitedHealth Group.

HIMSS, Maine - HIMSS, the global, cause-based, not-for-profit organization focused on better health through IT, elected Harold "Hal" Wolf III as its new president and CEO. Currently, Wolf serves as director, practice leader information and digital health strategy at The Chartis Group as well as a board member and officer of the International Care Delivery Alliance.

6sense, California - Predictive intelligence platform 6sense named Jason Zintak as CEO. Most recently, he served as CEO of Platfora, a leader in big data analytics, and as CRO of Responsys.

ReachForce, Texas - Cloud based data quality firm ReachForce named Dion Cornett as the new president and CEO. Prior to joining ReachForce, Cornett was the VP of global sales at MariaDB Corporation.

TetraVue, California - TetraVue, the provider of 3D camera technologies and optics solutions to government agencies, named Dr. Hal Zarem as CEO. Prior to TetraVue, Zarem was president and CEO of Seeo.

Sitecore, Denmark - Mark Frost, 59, has joined as CEO at the customer experience management software. Most recently, he served as CEO of MarkMonitor.