Sources of Appointments: 66 were External appointments, and 21 were internal promotions –Interim or Deputy CIO/CTO (1), Others (20).

Diversity:  10.3% of the appointments are women Tech Execs. 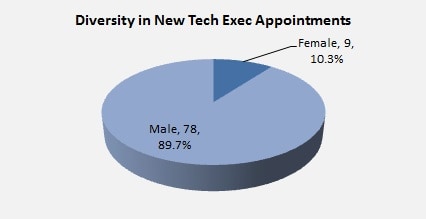 Geographic Distribution: 66 in the US, 9 in Europe, and 12 in Asia/Russia/ Australasia.

Dell, Texas - $59B, November 2015
Bask Iyer, CIO and IoT manager at VMware, has been named interim CIO of Dell.

Nordstrom, Washington, $14.4B, January 2017
Nordstrom is searching for a technology executive to lead digital strategy following an executive-level shakeup in which the retailer’s chief information officer and chief technology officer announced their departures in the span of two weeks. The CIO title will be eliminated. The company plans to hire a new CTO by the end of the year who will be responsible for all aspects of technology at Nordstrom.

Twitter, California - $2.2B, December 2016
Twitter's CTO Adam Messinger tweeted that he decided to leave the company and take some time off. Messinger didn't say where he was headed next.

Microphase, Connecticut - $9.12M, December 2016
The Company approved the appointment of Mr. Michael Ghadaksaz as the CEO of the Company. Prior to the Ghadaksaz appointment, Ghadaksaz served as the CTO and CMO. No tech chief replacement has been announced.

Sam's West, Arkansas, January 2017
Wal-Mart Stores CIO Karenann Terrell is leaving the company. Terrell has been with the company for six years, beginning as EVP of information systems. She was promoted to CIO in 2012 and has remained in the role for four years.

Deloitte, Illinois, December 2016
Deloitte is looking for a CISO reporting to the CIO.

United States Department of Defense, Washington, D.C., January 2017
Terry Halvorsen, who as the Pentagon’s CIO, is retiring at the end of February. Current principal deputy CIO, John Zangardi, is expected to step in as acting CIO.

MCBC Holdings – CIO David A. Kirkland was involved in an automobile accident and Kirkland is the subject of related criminal charges. Pending the result of legal proceedings, Kirkland has been placed on administrative leave by the Company. In his absence, Richie Brashears, the director of the company's IT function will temporarily report to CFO.

Mogo Finance Technology – CTO Eric Miles passed away from prostate cancer. The company is well positioned with a strong technology leadership team and does not intend to replace the CTO role at this time.